An engineering, procurement, and construction company asked HTRI to investigate methods—constrained by permissible pressure drop—to mitigate shellside flow maldistribution for an X-shell condenser, using cold seawater on the tube side to condense an off-gas on the shell side.

The client supplied Xist® ratings that were used to calibrate the CFD pressure drop model. The Xist calculations of pressure drop across the tube bundle enabled the substitution of porous media in the simulations. CFD models developed from the Xist analysis provided reliable prediction of other flow conditions.

HTRI modeled a symmetric half of the exchanger along a longitudinal, diametrical-cut plane through the X-shell cross-section. This approach reduced the computational effort through the exchanger model domain while maintaining good solution accuracy. A Reynolds-averaged Navier-Stokes solver was applied, which employed a k-omega Shear Stress Transport (SST) turbulence model. Second-order accurate discretization schemes were used for momentum and mass continuity equations.

This setup provided pressure and flow distribution data throughout the domain. The information was used to modify the mechanical design of the nozzles and distributor plate, as well as to predict the erosion and vibration potential of the first row of tubes.

Uneven velocity distribution in the original X-shell condenser as the flow passes through the baffles across the exchanger.
Flow enters from a single nozzle at the top and exits at the bottom. The central crosspasses have more than twice as much flow as others.

From the CFD simulation of the baseline geometry and conditions, HTRI determined that the central crosspasses of the X shell had more than twice as much flow as others. Additional simulations were run using

Centering a 3.0-m long distributor plate with discretely variable porosity beneath the inlet nozzle improved the distribution so that the flow rates between the crosspasses differed by only 16%. Adding a distributor plate along the entire length of the bundle provided essentially uniform flow to the entire bundle.

Placing two 1.1-m diameter inlet nozzles, with inflow from a 1.6-m diameter distribution manifold, indicated a level of maldistribution only slightly better than the baseline case with a single inlet nozzle. Again, adding a distributor plate with discretely variable porosity along the entire length of the bundle provided essentially uniform flow to the bundle.

The same X-shell condenser with two inlet nozzles. As shown, the flow distribution improved due to an additional distribution plate along the entire bundle length. 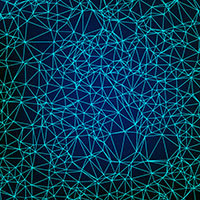 Another way to think about heat transfer: Applying neural networks to HTRI 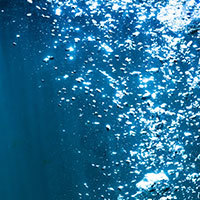 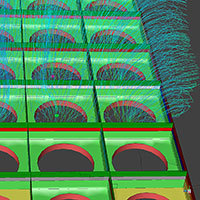 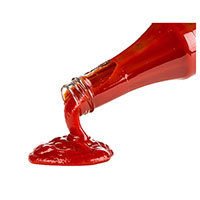 Non-Newtonian fluids: From concepts to modeling